For a long time now, one of the things that made Phoenix unique was the preponderance of trailers, mobile homes, and manufactured homes as part of its housing stock. More than any other city in the country, the Valley of the Sun has had a higher rate of residents leaving in factory-built homes. What made these communities so vibrant and healthy was the stark landscape and remote charm that comes with the southwest U.S. and Arizona’s independent spirit. These communities repelled the stigma of lower-class poverty and instead gave off the unmistakable defiance of being removed from society. It was only a partial removal from society, but it was by removal by choice. And that’s what gave these communities value and an identity.

Today, these communities are being threatened by a building wave of real estate investment and development. Tempe Mobile Home Park and mobile home parks throughout the greater Phoenix area are being bought by investors and, in many cases, being redeveloped for other residential and commercial uses. The tenants are given notice that their leases will not be renewed. But more than just a changing housing stock, it’s threatening to put basic housing out of reach for a growing segment of the population. In other words, it’s one thing to close a mobile home park, but when those displaced tenants struggle to find an alternative affordable housing option, this becomes a serious issue. 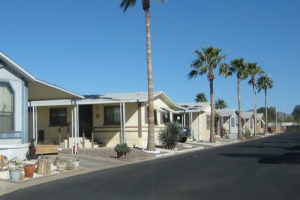 The idea that mobile home parks are an essential resource for Tempe and the local economy is easily seen in other western cities that are struggling to provide affordable housing. This affordable housing crisis and local economies increasing defined by Have’s and Have Not’s has led to a rise in the homeless population for the first time in nearly a decade. Before this latest wave of real estate development, the greater Phoenix area was better positioned than most cities to insulate its residents from a shortage of affordable housing. We should take lessons from other cities before it’s too late.

City Planning and Lack of an Urban Core

Most everybody who lives in the Phoenix area and even many outsiders know the metro area doesn’t have a well-defined urban core, but more like pockets of high-density housing and mixed-use development. And while this decentralized layout certainly has some advantages, it can complicate long-term city planning. Part of what we’re seeing with the purchase of mobile home parks is rising land values and development opportunities in places where communities have historically enjoyed affordable living. And while some of this conflict is inevitable, it can be all the more sudden and unexpected as Phoenix falls prey to the same forces that created affordable housing crises in other cities.