Have you heard the news? Record-setting home prices are back. As of June 2018, property values in the Valley surpassed the previous pre-Recession highs of 2006. This, along with renewed concerns of housing affordability, have some people worried that we’re headed toward another housing market crash. This time around, there are a number of important differences that suggest a housing crash is very unlikely, at least on the same scale as we saw a dozen years ago. First, adjusted rate mortgages are all but extinct as home loan vehicles. In contrast, historically-low fixed-rate interest loans have helped a new generation afford homes at higher price points than a decade a half ago. Moreover, and perhaps most important, home building isn’t outpacing population growth like it was a dozen years ago. This means, there tends to be more buyers than sellers overall. Inflation, average rent prices, and wage increases have further risen the floor on how far home prices might drop. 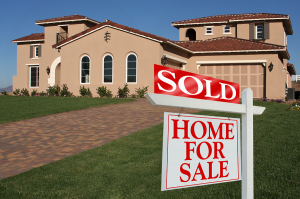 Because, look, we’re not saying that incomes have kept up with the rising cost of living, nor are we saying that Tempe home prices are going to keep going up forever. Furthermore, we personally see something of flattening out of home value appreciation, as housing becomes increasing difficult to afford. To some extent, it also seems like paying a greater percentage of your out-of-pocket costs to housing is the new normal for metropolitan areas with measurable housing shortages and rents that are getting just as difficult to afford. Even still, we do feel confident in saying that there’s little chance that home prices will drop precipitously anytime soon. Moreover, with interest rates poised to keep rising as well, the total cost of homeownership is likely to keep going up in the future.

In one sense, the overall housing picture in Tempe can be feel incredibly stress-inducing, especially for first-time home buyers. In another sense, this type of high-floor, low-ceiling environment can have a moderating effect for the prospective buyer. Look for the home that makes sense for you and your household, and while you may have a ton of new home equity right, you also almost surely won’t regret the decision to buy.

A dozen years later, when we look around at the housing market, we have more concerns about homelessness, housing affordability, and overall cost of living than we do of another crash. The national data is, arguably, even stronger that housing affordability and home prices are not too far out of whack.

Tempe, Arizona is home to the first and largest campus of Arizona State University. Around 660 acres in size, this campus has more than 70,000 students enrolled in at least one class. As a result, Tempe’s economy is largely college-driven; it benefits from a healthy flow of students into and out of the city each year. Unsurprisingly, this impacts the local housing market.

According to Katie Walsh of The Walsh Team, the strength of the Tempe real estate market is a constant demand for housing. In an interview with Commercial Café’s Expert Insight, she said, “As students come to ASU, their parents purchase housing for them as an investment, opposed to renting off-campus housing.” When these students graduate, they often find a new place in the area for a home upgrade. The constant movement between renting, purchasing, and upgrading benefits the real estate market. 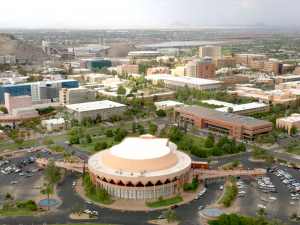 This, according to Walsh, creates a challenge: “there is never enough inventory between the student housing mentioned above and the families that move to Tempe for good schools in the area.” Even after kids graduate, families often refuse to leave their established neighborhoods. The combination of established households and a consistent influx of new residents creates competition, making for a healthy housing market. If you are planning to sell your Tempe home, bidding wars are likely. If you are planning to purchase real estate in the area, you will be investing in one of the nation’s most interesting housing markets.

Competition, combined with the lack of single-family home development, makes Tempe’s real estate market very exciting. Walsh noted that some Baby Boomers and Generation Y-ers are beginning to downsize, moving closer to ASU and fixing up older homes. Luxury apartments are popping up all over downtown, and Arizona State recently opened a retirement community near campus. No matter the generation or demographic, residents and newcomers alike are moving all over Tempe.

Investing in real estate is a popular and strategic choice. However, choosing a location can be difficult, especially if you want to get a large return on investment. Whether you’re planning to purchase a new family home, a vacation spot, or want to flip a few houses for profit, Arizona is the best place to put your money.

The 2007 housing crisis hit Arizona hard; during the housing boom, developers built thousands of housing units which ended up vacant when the bubble burst. The market—specifically in Tempe and Phoenix—suffered from evictions, foreclosures, and prolonged unemployment. The median home value dropped to as low as $100,000 (from $250,000 just before the crisis) and more than 40,000 housing units remained unsold. The market bottomed out in 2013; since then, property prices, home sales, and re-sales have slowly increased. The housing market has yet to fully recover. 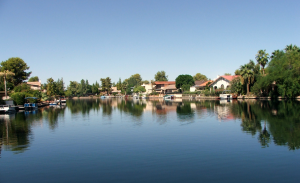 However, housing and migration trends indicate that Arizona is becoming a popular destination for young professionals and families; low home prices and plentiful amenities create an optumal environment for those wanting to put down roots in already-established communities. Furthermore, those wanting to build a new home have plenty of land options; officials recently reported that Phoenix has a surplus of owned vacant land covering almost 2.5 square miles.

Arizona is predicted to experience high real estate demand in 2018. This is likely a result of job and population growth; in 2017, an additional 51,000 jobs were added to the Phoenix area alone, meaning job growth in other parts of the state may be higher. Real estate prices are predicted to slow in growth, but they will likely continue to rise over the next several years. Investment properties are relatively affordable, making this an excellent place to purchase property, start a career, or flip a home.

As with most American cities, Tempe has dozens of distinct neighborhoods. If you are planning to move to this part of the state, it is essential to choose a neighborhood to fit your budget, lifestyle, and career plans. Below, we have detailed four of Tempe’s most popular neighborhoods.

Broadmor: Broadmor, located in the southeastern portion of Tempe, ranks among the city’s best neighborhoods of 2018. With a population of 1,678, the neighborhood is one of the largest in the area. According to a study conducted by AreaVibes, Broadmor ranks in the 93rd percentile for livability. Amenities include  . Broadmor’s cost of living index is around 13% higher than the rest of Tempe, but—when compared to other major American cities—it is still a bargain. 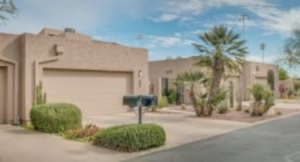 Ntna-Indian Bend: Just north of downtown Tempe sits Ntna-Indian Bend, a quiet, residential community. Close to both Evelyn Hallman Park and the Salt River, residents of this neighborhood enjoy the benefit of natural recreation and amenities. The median home value is 24% lower than in the rest of Tempe, and the cost of living index is around 2% lower than the rest of the city. This is an excellent neighborhood for young families and professionals. 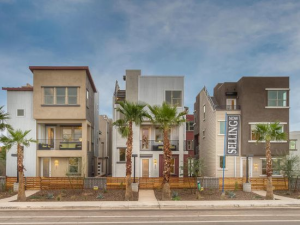 Cyprus Southwest: This neighborhood is on Tempe’s southern border. With a livability score of 72 and an A+ amenities rating, this part of the city truly has it all. The best part? It doesn’t cost a fortune to live here. The median home value is an estimated $177,700, and the cost of living is around 6% lower than in the rest of the city. With high graduation rates and excellent transportation, you can’t go wrong with this neighborhood. 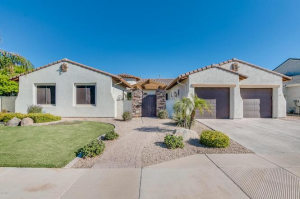 Alta Mira: This trendy neighborhood is ranked in the 96th percentile, scoring a very high livability score of 79. With lots of local amenities, low crime rates, and a stable housing market, this is an excellent place to settle down. The cost of living is slightly higher than in the rest of Tempe—21%, to be exact—and the median household income is 109% higher than in other parts of the city. However, the high price comes with several benefits—the neighborhood has the lowest crime rate in the area, the highest high school graduation rate, and one of the highest livability ratings in the state. 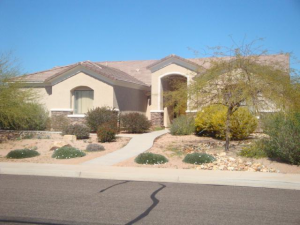 Tempe is the only city worth moving to here. No, we’re just kidding. As much as we love our little part of the world, there are a lot of great places to live in Arizona. It’s just that we think Tempe offers all the best things that the state has to offer with fewer of the drawbacks:

Real estate trends, driven by people in their late twenties and thirties, are changing nationwide. As millennials leave cities to start families (while escaping rising rent rates), they seek out smaller, less expensive, and more community-based locations. They are increasingly forming households and having children, choosing select suburbs and secondary markets—such as those which exist in Arizona—for improved quality of life and reduced cost.

Tempe is no exception to the nation-wide trend. Though posting listings is this site’s primary purpose, we want to make potential buyers and sellers aware of the changing real estate market. Arizona has seen a significant increase in residents—Maricopa County alone added over 222 people per day in 2016. With more residents than every before, the Arizona and Tempe real estate markets are shifting to become a “seller’s market,” favoring those selling homes and land. 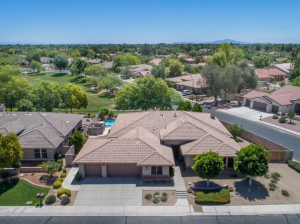 This trend now has empirical proof. In the past year, Tempe market trends indicate an increase of $18,000 (around 7%) in median home sales. Similarly, the average price per square foot rose from $153 in 2015 to $164 in 2016. Though data on 2017 is not yet available, we expect to see this trend continue. Moreover, with a median age of 29, Tempe is becoming a coveted destination for millennials, who are leaving larger, colder cities en masse in search of more affordable living options. It appears that this is the beginning of an Arizonian Renanaissance.

If you are planning to sell your home in the near future, now is the time to start. The Tempe real estate landscape heavily favors sellers—the median sales price is currently $294,000, up a startling $110,000 since 2010. Likewise, if you are planning to purchase land or real estate in Tempe, now is as good a time as ever—the projected forecast puts the median home sale at just over $310,000 by the end of 2018. If you are actively searching for a new home, this is the perfect place to start.